Natural history. The subject everyone assumes is just for weird geeky guys in brown suits who work at museums. Earlier, we discussed the Greenhouse Effect, the atmospheric process by which greenhouse gases like carbon dioxide trap heat inside a planet’s atmosphere. At this point, a healthily skeptical mind may think “Okay, there is a relationship between greenhouse gases and warming. But the Earth has always had a fluctuating climate over millions of years. Isn’t it possible that this current warming is just part of another natural cycle?” This line of thinking is on the right track, and is partially correct. The Earth’s climate has always been changing (over periods of hundreds of thousands of years), and scientists have data on Earth’s climate going back millions of years. We’ll discuss why, despite knowing about Earth’s cyclical climate pattern, this current period of warming is important. But we’ll also talk about how scientists figure out past climate data, focusing on the clever techniques they use to figure out what the climate was like eons ago. These techniques include radioisotope dating, palynology, dendrochronology, and ice core sampling.

Why this period of warming is significant

The overwhelming scientific consensus is that the current period of warming is caused by human activity, and will be problematic (to say the least). This conclusion was reached by decades of multidisciplinary research spanning fields like ecology, geology, atmospheric and oceanic studies, anthropology, and more. One of the most significant pieces of information we have is our historical record of carbon dioxide. This record goes back 800,000 years, and shows how CO2 has varied over the millennia. Over those 800,000 years, the level of CO2 in the atmosphere has never exceeded 300 ppm (parts per million), usually maxing out around 280-290 ppm. From the year 1950 to the present, CO2 levels have crossed 400 ppm.

Human activities, ranging from industry, agriculture, and transport have spewed gigatons of greenhouse gases over the past several decades, catapulting global CO2 levels significantly over natural historic highs. Society has benefited enormously off industrialization, but the convenience brings costs. This period of warming (referred to as anthropogenic climate change) is significant because it is occurring at a much quicker rate than natural climate changes – periods of decades as opposed to millennia. Species go extinct during natural, slow, climate changes; under the accelerated climate change caused by humans, species are going extinct at around 1,000 times the normal background rate. The ecosystems that support us are not equipped to handle such extreme temperature changes in such a short time span, and the consequences will ripple up through the food chain and impact humans, starting with the poorest and most disadvantaged citizens of our global society.

Okay, now that the depressing material is out of the way, let’s have a little fun and talk about how scientists figure out how hot or cold it was on Earth thousands or millions of years ago, or how much CO2 was present in the atmosphere 500,000 years ago. We’ll start with dating for more recent events, before talking about long-term dating in Part 2 of this series.

You’ve probably heard of the term “half-life” before. A half-life is the amount of time it takes for an unstable, radioactive isotope to decay into half of its original mass.

Quick definition: Isotope: A variation of an element with a different amount of neutrons. Radioactive isotopes are unstable and decay, while stable isotopes do not.

As this substance decays, it leaves behind a stable isotope. The two are referred to as “parent” and “daughter” isotopes, respectively. For example, if I have 8 milligrams of a radioactive substance whose half-life is 10 years, then in 10 years, that substance would decay to 4 milligrams. Consequently, 4 mg of the stable, daughter isotope is produced. After 10 more years, it would decay further to 2 mg, and 2 more mg of the daughter isotope is produced, for a total of 6 mg. And so on. This is summarized in the diagram below. 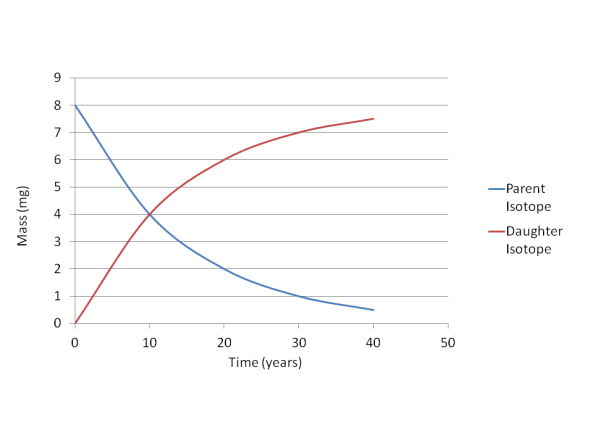 There are trace amounts of naturally-occurring radioactive compounds spread throughout the Earth’s crust, oceans, atmosphere, and living things. Researchers can use these trace elements and cross-compare them with the amount of their daughter isotopes present to determine the age of the sample they are examining. If had a rock sample with 0.5 mg of the radioactive material mentioned above, and 7.5 mg of its daughter isotope, by knowing its half-life, I could surmise that four of the substance’s half-lives have passed. This would date the sample at 40 years old. Different materials have different half-life periods, ranging from seconds to millions of years. Some isotopes, like Lead-210 (210-Pb) and Cesium-137 (137-Cs) have half-lives of 22 and 30.3 years, respectively, making them very good for dating recent events. One of the most useful radioactive isotopes to study in order to reconstruct (relatively) recent climate events is Carbon-14 (14-C), due to its moderate half-life length and prevalence in organic matter.

Radiocarbon dating uses the unstable isotope of carbon, Carbon-14, to surmise the age (primarily) of organic matter, like trees and fossilized plant or animal remains. 14-C is created naturally in the atmosphere by cosmic rays knocking a proton off of a nitrogen atom. The nitrogen atom then captures a neutron, becoming 14-C. This process is rare, but happens at a constant background rate, generally consistent across time. 14-C has a half-life of 5,730 years, and decays into Nitrogen-14 (14-N), the most common isotope of nitrogen. Although 14-C exists in trace amounts (1 part per trillion carbon atoms), it still gets incorporated into the carbon cycle on the surface. Producers like plants and phytoplankton take in CO2 (and small amounts of 14-CO2) at the surface for photosynthesis. These producers are eaten by primary consumers, who are then eaten by higher-level consumers. As a result, the 14-CO2 travels up the food chain.

When an organism dies, scientists can locate the small amounts of 14-C in its fossilized remains. Using this, not only can researchers determine when an organism died, they can also surmise the climate conditions required for that organism to have been there in the first place. Palynology, for example, is the study of using ancient plant pollen to determine vegetation and climate conditions from ages past. Each plant’s pollen is unique, and pollen is covered by a protective surface, allowing it to resist decay. If I were to find pollen from a species of arctic plant in California, instead of assuming it was scattered here by someone with way too much time on their hands, I could figure out the age of a sample of the pollen using radiocarbon dating, and determine that the pollen is approximately 12,000 years old. This means that 12,000 years ago, the climate in the area must have been cold enough to support this species of plant.

The above example actually happened (except for the part about me finding the pollen) – pollen from the arctic Dryas flower was found in the Sierra Nevada mountain range of California. The samples were dated to be around 12,000-13,000 years old, around the time the Earth was coming out of a glacial period, indicating that an abrupt change in climate temporarily plunged the Northern Hemisphere back to near-glacial conditions. This period of time is known as the Younger Dryas.

One limitation of radiocarbon dating is that it only gets us so far – after 7-10 half-lives, it is just about impossible to detect remaining traces of 14-C in a sample. This generally gives us information up to ~60,000 years back, making it useful to study relatively recent vegetation and climate patterns, but not more ancient ones.

So how do we date more ancient events? Stay tuned for Part 2 (of 2) of this series, where we will discuss methods for long-term climate dating.

One thought on “Modern climate change is not natural. Here’s how we know. (Part 1)”

“Science is a cooperative enterprise, spanning the generations. It’s the passing of a torch from teacher, to student, to teacher. A community of minds reaching back to antiquity and forward to the stars.”